The Legality of Bhikkhunī Ordination

This paper examines the legal validity of the revival of the Theravāda bhikkhunī ordination that has had the 1998 Bodhgayā ordinations as its starting point.

My presentation is based on extracts from a more detailed study of various aspects related to “The Revival of the Bhikkhunī Order and the Decline of the Sāsana,” in which I also tried to cover relevant secondary sources to the best of my ability (JBE 20: 110–193). In what follows, I focus on the canonical sources only in an attempt to make my main findings regarding the question of the legality of bhikkhunī ordination easily accessible to the general reader. My presentation covers the following points:

To read the full text:

The Legality of Bhikkhuni Ordination

The Maiden Who Fell in Love with a Thief:  Considerations on the Story of the Nun Bhaddā Kuṇḍalakesā

Buddhist literature has given us many extraordinary figures who have proven to possess considerable, enduring appeal. Exceptional even by these high standards is Bhaddā Kuṇḍalakesā, as she is author, protagonist, or inspirer of some of the world’s earliest poetry by women, of a great epic dedicated to her and of popular songs and movies that are still played in the twenty-first century. The nun Bhaddā  was a direct disciple of the Buddha and came to be known for her quick wit, the type of ordination she received, her prowess as debater, and the speed at which she gained awakening once taught by the Buddha.

The following passage contains all that is attributed to Bhaddā in the Verses: 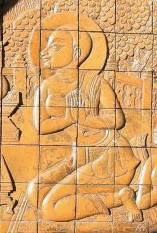 Going out from my daytime resting place on Mount Vulture
Peak, I saw the stainless Buddha attended by the Order of
Bhikkhus. [108]

Having bent my knee, having paid homage to him, putting
my raised hands together, I stood face to face with him. “Come
Bhaddā.” He said to me. That was my full ordination. [109]

I wandered over Aṅga and Magadha, Vajjī, Kāsī, and Kosala.
For fifty years without debt, I have enjoyed the alms of the
kingdoms. [110]

Truly he produced much merit. Truly wise was that lay
follower who gave a robe to Bhaddā, who is now completely
freed from all bonds. [111]

To read the full text:
Story of the Nun Bhaddā Kuṇḍalakesā

The text has kindly been offered by Ven. Bhikkhunī Dhammadinnā
Here is her letter:

Dear Venerable Visuddhi,
I am sending you an article recently published in our Dharma Drum Journal of Buddhist Studies that may be of interest to you and your student:
Alberto Todeschini, “The Maiden Who Fell in Love with a Thief: Considerations on the Story of the Nun Bhaddā Kuṇḍalakesā”, Dharma Drum Journal of Buddhist Studies / Fagu foxue xuebao, 13 (2013): 153-188.
With much mettā,
Bh. Dhammadinnā


Sanghamittā (Sanghmitra in Sanskrit) was the daughter of Emperor Ashoka and his Buddhist queen Devī. Together with Venerable Mahinda, her brother, she entered an order of Buddhist monks. The two siblings later went to Sri Lanka to spread the teachings of Buddha at the request of King Devanampiya Tissa (250 BC – 210 BC) who was a contemporary of Emperor Ashoka (304 BC – 232 BC) of India. Ashoka was initially reluctant to send his daughter on an overseas mission. However, because of the insistence of Sanghamittā herself, he finally agreed. She was sent to Sri Lanka together with several other nuns to start the nun-lineage of Bhikkhunis (a fully ordained female Buddhist monastic) at the request of King Tissa of Sri Lanka to ordain queen Anulā and other women of Devānampiya Tissa's court at Anuradhapura in Sri Lanka who desired to be ordained as nuns after Mahinda converted them all to Buddhism.
After Sanghamittā’s contribution to the propagation of Buddhism in Sri Lanka and her establishing the 'Bhikkhunī Sangha' or 'Meheini Sasana' (Order of Nuns) there, her name became synonymous with 'Buddhist Female Monastic Order of Theravāda Buddhism' that was established not only in Sri Lanka but also in Burma, China and Thailand, in particular. The day the most revered tree, the Bodhi tree, a sapling of which was brought by her to Sri Lanka and planted in Anuradhapura, and which is still surviving, is also celebrated every year on the Full Moon day of December as "Uduvapa Poya" or "Uposatha Poya" and "Sanghamittā Day" by Theravāda Buddhists in Sri Lanka. 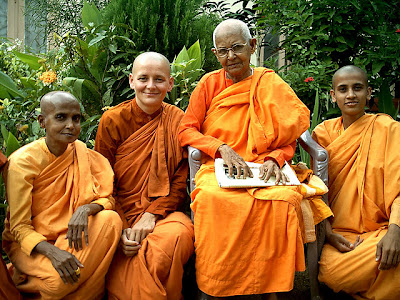 The Bhikkhunī Sangha (a Dhamma-vinaya heritage started by Lord Buddha during his lifetime in India), locally known as 'Bhikkhuni Sasana' or 'Meheini Sasna' (Order of Priestesses or Nuns) that was established by Sangamitta in Sri Lanka prospered for over 1000 years, till it disappeared in 1017 AD.

The reason for such an end is attributed to the invasion of Chola's, Hindu rulers from South India, whereafter Bhikkhus and Bhikkhunīs were not seen in Sri Lanka for quite some years.
Bhikkhunī ordination is the third and ultimate full stage of ordination of nuns; the earlier two stages that nuns have to go through are the sramanerika (novice), siksamana (probationary).

In India, the Bhikkhunī Order was established by Buddha six years after the Bhikkhu Order was established, in the 6th century BC. It was spread to Sri Lanka by Sangamitta in the 3rd BC, by his step mother Bhikkhunī Mahā Pajapatī Gotamī.
Initially, with the spread of Buddhism in ancient India, 18 (eighteen) Vinaya (precept) schools developed. However, now only three are extant. These are the Theravada practiced in Sri Lanka and Southeast Asia; the Dharmaguptaka that is practiced in Taiwan, China, Korea, and Vietnam; and the third school is the Mulasarvastivada adopted in Tibet.

In 429 AD, Bhikkhunī Devasara, a fully ordained nun from Sri Lanka, had realised that Bhikkhunī Sangha was in a state of survival, on account of war and famine and could vanish from Sri Lanka any time. She, therefore, had led a mission to China to establish the Bhikkhunī Sasana in that country. The original Theravada Bhikkhunī lineage established in China since 429 AD has continued to function to this day.

In Thailand, the lineage is well established. A clay statue of Sanghamitta made by Ven. Dhammananda in 2002, is deified in a shrine room at Songdhammakalyani Monastery in Nakhonpathom. Her image is flanked by images of 13 Arahat Theris.
However, Ven. Asarana Sarana Saranankara Maha Thera introduced the Higher Ordination from Thailand. She is credited with re-establishing the Order of Monks in Sri Lanka in 1753 AD. It is now said that there are more than 1000 Bhikkhunīs in the country.

It is also reported that a quite a number of women from western countries practicing the Theravada tradition and a few women from Thailand have been ordained to Bhikkhunī order in Sri Lanka in recent years.

The Unduvapa Poya festival
Unduvapa Poya festival is observed in Sri Lanka on the Full Moon of December to commemorate two specific events namely, Theri Sangamitta day of arrival from India to establish the Order of Nuns and to also mark her bringing a sapling of the sacred Bodhi-Tree from Bodh Gaya and planting it in Aunradhapura. The festival day has been designated as "Sanghamitta Day". On this day, ten ordained nuns initiate the festive celebrations every year.This observance was revived in 1903 at the suggestion of the Mahabodhi Society of Sri Lanka.
This Observance is performed by Buddhists by first following the 'Five Precepts'; bathing, shaving, wearing white robes, and kneeling with clean bare feet in a shrine before a Buddha-statue. The kneeling and bowing is done first three times with feet, hands, elbows, knees and head touching the floor. This is followed by reciting loudly the memorised prayers, with folded hands (palms at the heart). The prayers offered from sunrise until the next dawn starting with the words are: 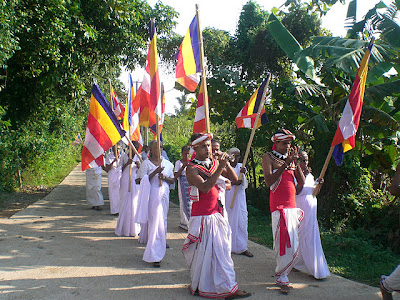 It is also a prayer offered on this day for the revival of Bhikkhuni Sasana in Sri Lanka and with the hope that it will flourish in the future.  On this day they have a huge procession from the temples going through the whole village. It is proposed that the day should also be celebrated as the International Women’s Day, as a mark of honour to Sangamitta who established the women's Order.

Gratitude to Wikipedia for this textual reference. 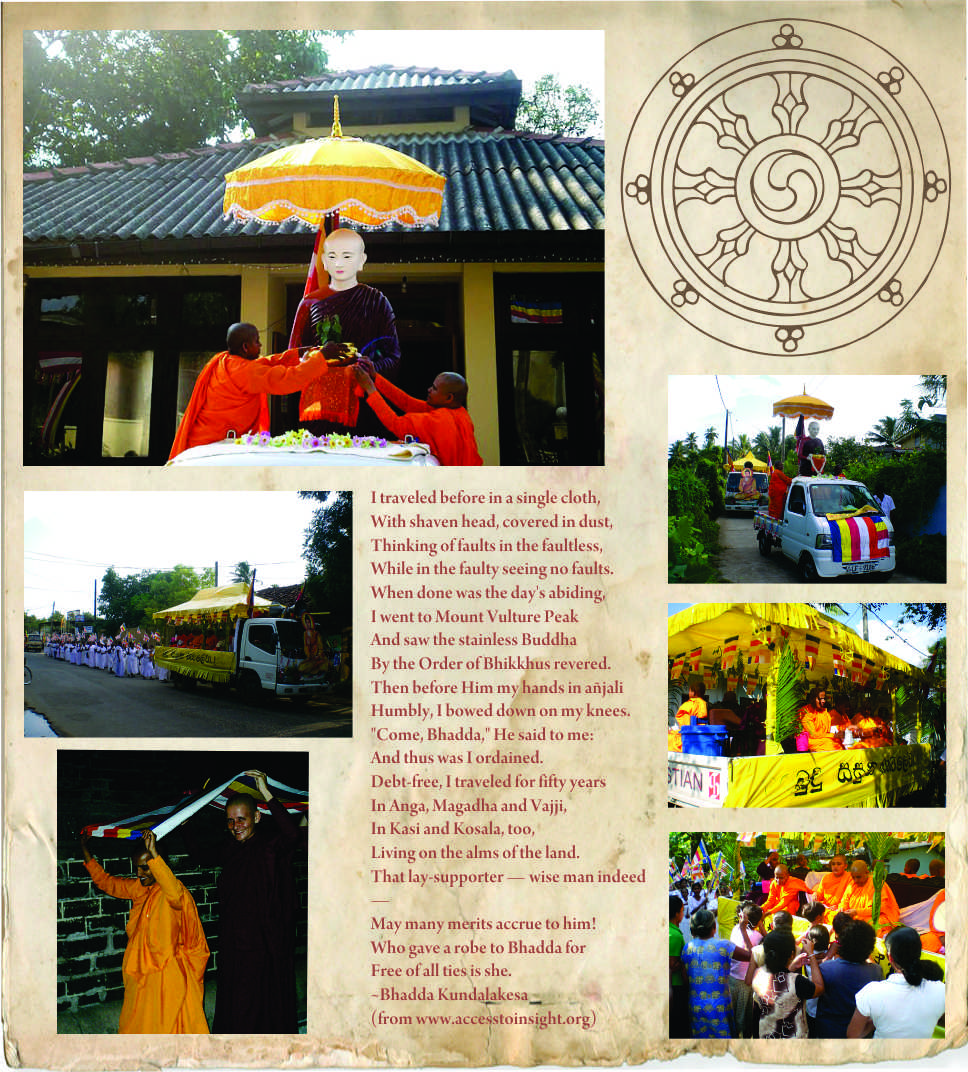 WELCOME to the KARUṆĀ SEVENA blog!

Welcome to our blog - here we will give you updates of our current activities and share information and dhamma messages. 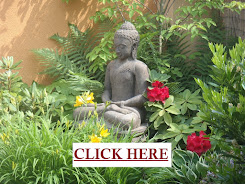 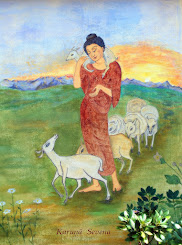 Make an island of yourself,

make yourself your refuge;